- October 23, 2019
Assam 2 Child Policy Latest News Assam 2 Child Parents Govt Jobs Assam Rule on 2 Child Norms India 2 Child Policy . Assam Cabinet has decided to implement 2 child policy. 2 Child Norm’s of Assam says if you have two children than you are eligible for govt jobs or if you have above 2 children than you can’t get govt jobs. In today’s time Assam Growth Rate of Population is larger than any other states in India and recently millions of people facing deportation in detention centre because they unable to present reasonable documents which proves they are living there. Not only 2 children policy introduced by Assam Cabinet but also Assam Govt says you can get benefit of other Government scheme like Ration card which divided in number of candidates. On Monday late evening Chief Minister of Assam organized press meeting to tell India and world for adding their name in 2 Child Police Country which are Vietnam, Hongkong, China, United Kingdom and Iran. We soon hear Assam 2 Child Policy amendment by other opposition parties such as Congress.  Very soon India will pass China (No Scheme for More than 2 Child) in Population census. 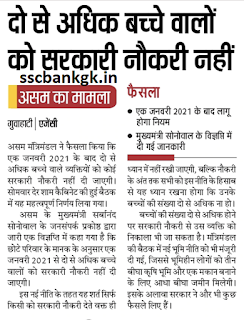 PM Modi Statement on 2 Child Policy: On 15th August Prime Minister Modi discuss the matter of Growing population and its harmful effects on resources of India from Red Fort. Pm Modi says following two child and 1 child itself is like a Act of Patriotism. BJP govt come into power in 2016 and created draft on population policy on 27th March 2017. Hemant Biswa Sharma is an Indian politician from Assam said we are contacting central govt to make rule for MLA who have child more than 2. It  may also impact politician such as Lalu Yadav who have 11 Children and Owaisi Children number 6.

Assam Land Scheme: Assam providing land to landless family and 3 bigha for farming and cultivation. Beneficiaries will not be able to sell land up to 15 years.
2 Child Policy Assam