UP Traffic Fine Sanshodhit Vahan Act cum Rule applied from 1 September 2019 which means today. Now we are advising to all people, especially youth come in line and starts following new traffic rules from 1 September 2019 which consist of heavy amount of fines (challan). You can view UP Traffic Challan List imposed on innocent public up to 10 times. If you running your Car, Bike and Truck without driving license, become drunk, not wearing seat belt and funny things we saw on our road street is tripling and even four people can just themselves on 100 CC bike splendors and 150 CC popular bike of Pulsar. Minimum fine of breaking rules in any state starts from Rs 1,000 to 10,000.


UP Traffic Challan Rates List 2019: Rs 25,000 fine for Non Adults (Children at below age 18 years) who met with an accident with serious injury. This traffic niyam is for both two wheeler and 4 wheeler vehicles. Not giving to side to ambulance and aggregators (found guilty under licence rules) minimum 25,000 to Rs 1 Lakh fine will be regulated. UP Police recruited special teams in place of Traffic chauraha.

UP New Motor Vehicle Act Penalties 2019: Traffic police will take your photos and if required your videos will be uploaded on social media account of UP Police Board of Traffic. 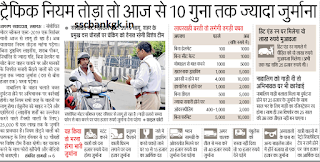