E Challan UP Status 2019 Here we have bad news for all people who don’t follow traffic rules while running Bike, Cars, Bus and Truck. There is list of Jurmana (Fine in English) made by  Dheeraj Sahu who holds important posts in Uttar Pradesh Transport Department as Parivahan Nigam Prabandh Nideshak Dheeraj Sahu says both driver and conductor should have to run their vehicle like a Airplane Pilot to avoid any type accident that can harm both Public and Government property.  He further says before running bys you should check technical maintenance of your vehicle which can help you to save from serious accident and road safety.

UP Police Challan Latest News 2019: DIG has accepted UP police is making trouble for people in road and he suddenly given orders to all traffic police on duty time to check only people who are not in rule of UP Govt Traffic Police Challan.

UP Traffic Police E challan: UP Government issued important notice to all Thana Prabhari for making them visible in every chauraha to start campaign on e challan of drivers. After giving mobile devices that can register your name in sandbox of challan, up police within three month challan more than 65 Lakh bikers, cars, bus drivers and trucks. 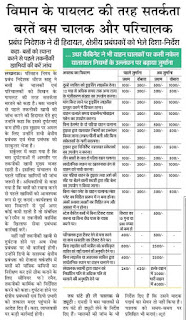 Challan on Giving Driving License to another person: Rs 500
Challan on From 12 Months you are using other state registration number: Rs 300
E Challan Rate If you not able to show your driving license when ask: Rs 500
E Challan Hyd during driving, if you are using walkman, mobile calling: Rs 500
Fine Rate without Helmet running two wheeler vehicles: Rs 500
Challan Rate on not checking Green, Red Yellow signal of traffic time and change your route: Rs 300
Jurmana If driver don’t use traffic signal: Rs 300