Rs 10000 Driver Challan For Talking on Phone while Driving in UP, Penalty on DL, Insurance

- June 17, 2020
Rs 10000 Driver Challan For Talking on Phone while Driving in UP Penalty on Wrong Driving Licence Documents Challan on High Speed Driving Penalty on Loud Horn Helmet Challan Rs 1000. UP Government has tighten grip on traffic rules and regulation. If anyone found without belt while driving on a car than He/she will have to pay Rs 1000. In a new rule, if you are riding without licence or have not crossed 14 years of age than Rs 5000 fine charged on you.

Challan on High Speed Driving: According to traffic rule minimum speed should be maintained by any person on road is 40 KM per hour and maximum speed is something 60 or 80 km. So Rs 4000 fine receipt given to you be traffic police on exceeding your car, bike speed. Rs 4000 penalty also applies to Yatri/ Maal Vahan.

Penalty on Car Race and Trial: Without Government permission, if someone wants to become Triple X, Need For Speed or as a hero then they will have to pay a penalty of Rs 5000 (first time ). Second time car race penalty increased to double i.e. Rs 10,000. 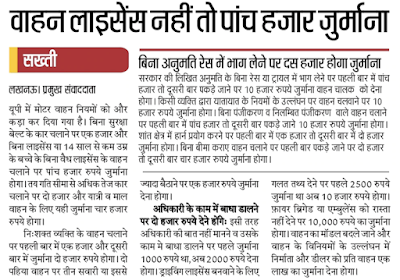 Fine on Disturbing Traffic employee: If person will not tolerate to Traffic rule officer and starts abusing him/her that person will contact to minister someone. Rs 10,000 penalty on changing model, silence of bike and un identified number plate.

Penalty on Wrong Driving Licence Documents: If you submit fake documents or written wrong information while making or renewal of DL than Rs 2500 charged first time and after that Rs 10,000.

Penalty on Loud Horn: Using loud horn in your car and bike and disturbing somebody on road or in uncrowded area than Rs 1000 and Rs 2000 second time. Rs 2000 penalty for not having insurance and second time Rs 4000.