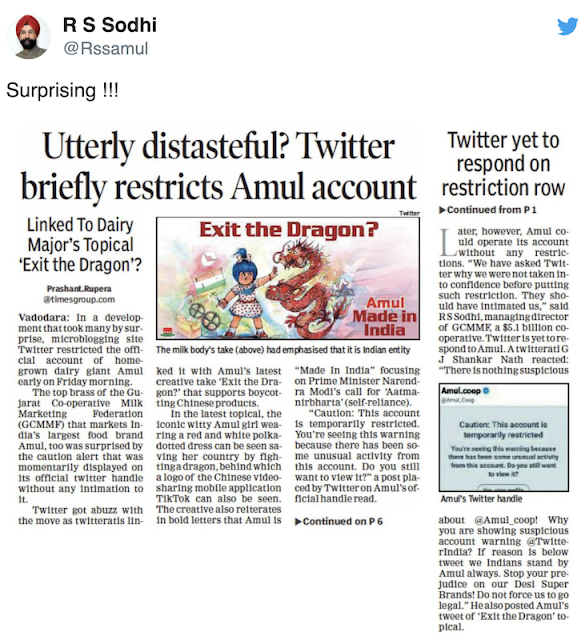 Amul Exit the Dragon AD: Amul Girl is official brand of Amul products and right now you are seeing Iconic Amul Girl is fighting with Dragon of China in boarder and also saying stay away from India. Main focus of Amul Brand is Make in India and in big word Made in India is displaying on image box. 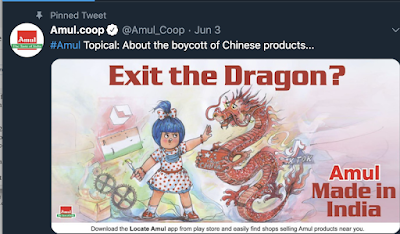 On current time twitter has not given any clarification on why they block Amul Twitter page. GCMMF MD R.S Sodhi tweeted," we wants statement from twitter regarding why they block our tweets.

Tweeter users reaction on banned tweet of Amul Coop:
1.
Soham Prajapati @Soham_cid · Jun 3 Replying to @Amul_Coop #RemoveChinaApp #AatmanirbharBharat #VocalForLocal Amul is one of the best example of #Swadeshi brand and had also made in India and made for world as having export business.

We are waiting for @SqueaksMedia social media app...after that we uninstall #twitter too.... I know twitter is not Chinese but they temporarily block our favourite brand @Amul_Coop #Amul #MadeInIndia 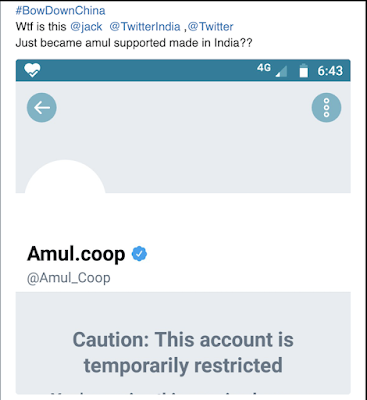 3. This not 1962 Beware you Chinese. This is new India. Do not dare to mess with us. We are peace loving but do not spare those who dares to assault our self-respect. Go back or be ready to face the dire consequences. We are already working on boycotting your low grade products.