Al Nassr official sent proposal to Cristiano and Ronaldo is looking on the table, as called last week. €200m per year until 2025, but including sponsor deals. 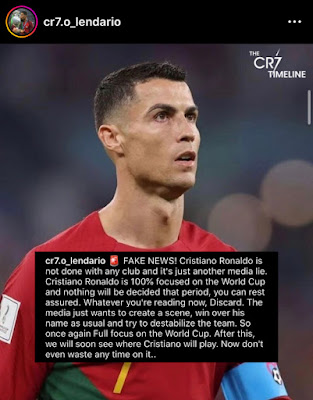 Free agent Cristiano Ronaldo will sign a 2.5-year contract with Saudi Arabian side Al Nassr in a deal potentially worth $200M per season, reported by MARCA.

Sports Bible Twitter handle revealed that Cristiano Ronaldo is agree to sign but May be it is after the World Cup because Mbape is leading him with 9 years of gap.Mbappe has overtaken Ronaldo for World Cup goals!. He's 14 years younger.

Middle East, Qatar and Gulf media just wants to create a scene, win over his name as usual and try to put down moral of his team. So once again Full focus on the World Cup. After this, we will soon see where Cristiano will play. Now don't even waste any time on