Saudi Arabia wants to host FIFA World Cup 2030 and if administration unable to get chance of hosting KSA FIFA World Cup 2030 they would go for wedding Olympics commonwealth game and other international tournaments. Saudi Arabia right now is celebrating it's win against Argentina and king of Saudi Arabia has announced public holiday for all government and private employees as well as officers. 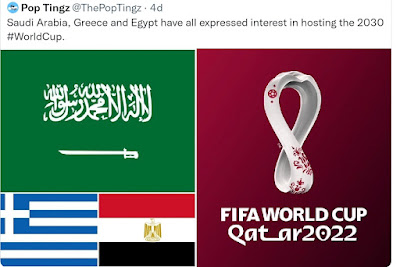 According to Reuters Saudi Arabia is expected to paying and added there foreign exchange of 40 billion dollar if FIFA World Cup agree to give approval of Saudi Arabia Qatar FIFA World Cup host 2030. But here is main problem because as a religious country you can't sell beer in Saudi Arabia and Qatar. however FIFA chief has also given explanation on their beer ban and said to media we should respect other country law.

Some FIFA friends are also coming that Saudi Arabia will make a joint bid with two other countries as a CO host which are Egypt and Greece but main partner will be sorry Arabia and the majority of games including knockout will be held only in Saudi Arabia.

Saudi Arabia is a oil rich country and it is also supported by United State of America. Maybe it is also expected that it may get or have a 50 60% chances of getting FIFA world cup in Saudi Arabia. Saudi Arabia have a hot climate and they have to make infrastructure like Qatar.

In an interview with Sky News sports minister of Saudi Arab told that Saudi Arabia is exploring a bit to goes that 2013 World Cup with Egypt and Greece. But main question that European American Brazilian and other non Muslim countries people are asking that Saudi Arabia may also ban their like Qatar.

Many and Power Can Buy Anything: Everyday Saudi Arabia is making 1 billion dollar from its oil. And FIFA only needs money and also have lots of motivational quotes to tell the people in the world. Sports minister of Saudi Arabia prince Abdul Aziz bin Turki Al Faisal claim that his country will support a private sector bid for Manchester United and Liverpool.