Recently Twitter was flooded with FIFA World Cup fans who come to Qatar for supporting their country but there they saw that Qatar administration who is looking into the matter of FIFA world cup in 8 stadiums. The locals to act as FIFA fans to make it or look like an actual World Cup.

Many people are also posting images related to paid people to dress as fake fans like England Brazil Argentina France and USA team dress but when they talk to real fans they don't know the ABCD of football. Qatar government is paying workers from India Pakistan Bangladesh Maldives and other countries to dress up as a fan from each country to make the world cup more hyped.

In below image you can see a treat with image treated by a blue tick account holder named football tweet said that it's look like Qatar have higher locus to pretend to be supporter and build the environment for the world cup. 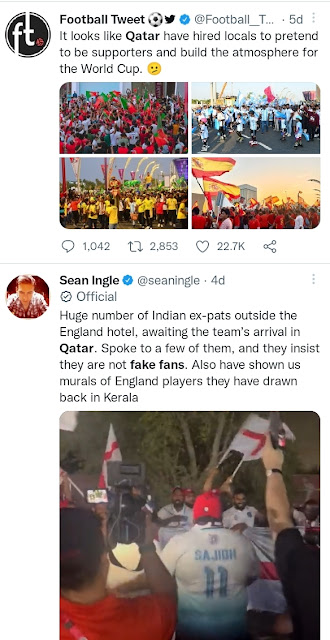 Large number of France you will find in Soccer matches from Europe, USA, Australia, Brazil, Argentina etc. Mostly all nation speaks English frequently. If you want to see real news then you should go to Twitter page and search fake fans then you will already see the news related to Qatar FIFA etc. Our article are based on social media resources.