Here we are talking about China Sheep who is cycling around from over 10 days. If lock of ship in inner mangolia which is the place of Genghis Khan have been walking in a circle for over 10 days straight and no one knows why they are doing this. 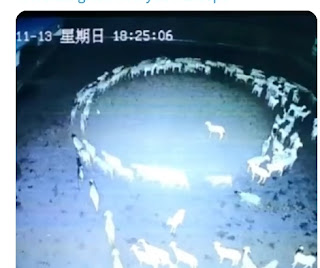 People are calling it The Great Ship Mystery. Mongolia is a country and it is also called a Northern China all these ships are healthy and they don't have any types of problem related to their legs but they have one common problem that if one ship jump then all other ship will automatically jump and follow their front leader.

Farmers were living in that area are in very mode and people are panic right now and scientist were enable to explain the phenomenon. These flock of sheep now going to complete there 12 days without stopping. Media around The World now already going to that place where these sheep.

According to nature, animals predicts prediction more than human. when the earthquake is coming, they know when the storm is coming and they can feel all types of dangerous through their brain prediction which human technology can't predict right now. Like flying birds in solar eclipse you can see there reaction during the time of solar eclipse.