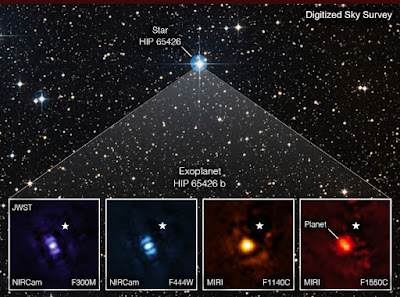 JWST First Exoplanet Image: This is a James Webb Telescope image of an exoplanet 385 light years away. Those photons bounced off HIP 65426 b nearly 400 years ago.JWST has imaged its first exoplanet! The world, HIP 65426 b, is a "super Jupiter" nearly 400 light-years away.
This is a huge milestone for the telescope, and just the start of its transformational studies of alien worlds.
NASA Exoplanet HIP 65426: Acoording to Fox news exoplanet 65426 is a gas giant like our Jupiter. Which means it has no rocky surface and it can be habitable.
How NASA Find Exoplanet: Exoplanet HIP is 6 to 7 times bigger than our Jupiter and it is 15 to 20 million years old. James webb telescope is made for finding planets, stars, comets, galaxies, nebula. If any planet revolves around it star like our earth revolves around sun. Than James Webb Telescope starts capturing images of that planet and stars.
James Webb Telescope Alien Exoplanet: James Webb Telescope checks planets type from its colour and divide orange, yellow, blue, red colour into hydrogen, water, methane, iron and other chemicals compounds. Star named HIP is 385 light years from our solar system.
James Webb Trlescope Infrared Camera: James Webb Telesope take picture of exoplanets by using it’s important camera named Near Infrared Camera and Mid Infrared Instrument.