China become third country to discover mineral on moon. This Moon mission of China named Change-5 mission was landed Oceanus Procellarum in December 2020 and it successfully deliver 1.73 Kg of lunar samples to earth. 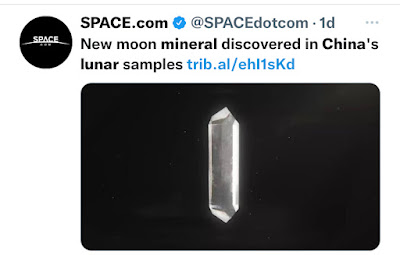 Researcher says crystal have a substance of Helium 3 and scientist from NASA found large number of Helium 3 reserve on moon which is rare on earth. Back to back moon mission will give other evidence of rare minerals such as Helium 3, Uranium, Plutonium etc.

List of Country Finding Mineral on Moon: This discovery means, China is the third country to discover million dollar crystal of the moon followed by United States and Former Soviet Union.

China Change 6 Moon Mission 2024: China upcoming Next moon is Change 6 and its main objective to land on those moon surface which people never see and it never faces towards the earth.