Walmart Investment in Tata Super App: Sources say Walmart agrees to invest 25 billion dollar in Tata Super App. However talk is still going on how much Walmart will purchase Shares of Tata Super App between 1.4 Lakh crore to 1.8 Lakh crore. This deal will become one of biggest deal in sector of retail because of its heavy investment. 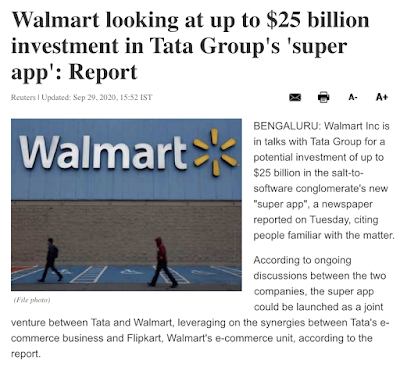 
Tata Super App Valuation: For transaction purpose Walmart has nominated Goldman Sachs as a Investment Banker. Valuation of Tata Super App calculated between 50 to 60 billion dollar. However Tata is also contacting other investor to invest in Tata App.

We can see here in India most promising company for investment under 1st and 2nd spot now become Jio and Tata. Reliance and Tata are blue chip company of India. In these two companies investors from foreign world Saudi Arabia, Qatar, USA, Germany, Australia has invested billions of dollars. You already know Muktesh Ambani is making 90 crore every hour from all of its subsidiaries.