Sushant Singh Case CBI Order Latest News: People were demanding CBI enquiry for Sushant Singh Rajput from day 1, when they found something difference between Suicide Vs Murder. Shekhar Suman said if any person suicide than HE/SHE may leave suicide letter and Ravi Kishan the famous Bhojpuri actor says no one can suicide after playing Pub G type game or drinking juice and recently an American doctor says someone has used stain gun to neutralise him because same case happen in America also.


CBI Sushant Singh Rajput Mobile Phone: Both Mumbai Police and Bihar Police has to submit evidence collected by them. In large manner and from 40 days, Sushant Singh Rajput Fan wants CBI enquire in SSR Case but due to some political interference the case in good manner unable to reach in Supreme court of India Now Mumbai police has to submit Mobile Phones, Diary, files and all personal documents which they were kept after Sushant Death Case. 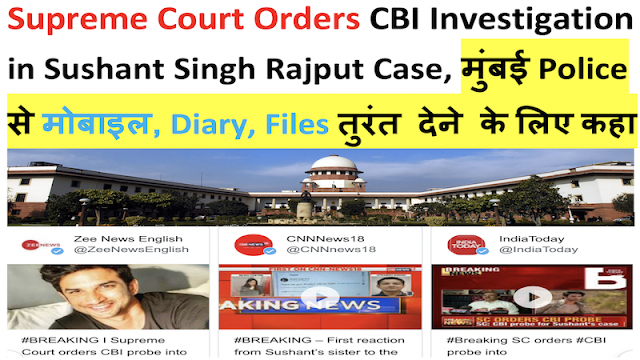 Daily the most viewable time when family sits together to watch tv is 9.00 PM, than they only see debate, news and articles on Sushant Singh Rajput Case.

Madhav Sharma: It is court ordered CBI investigation. Maharashtra police must comply and assist.”  This means: There will be proper investigation from the scratch. Rhea Chakraborty & Siddharth Pathani will be arrested soon and The truth will come out. #CBITakesOver

India Today: Sambit Patra said the SC decision to allow CBI probe, is a “thumbs down to the Maharashtra government for their biased attitude."