- September 10, 2019
Traffic Rules Penalty UP, Delhi Challan Penalties on Vehicle Insurance Premium, New Traffic Rules and Fines Latest News. On Renewal vehicle insurance premium, E Challan will impact your insurance when second time violation on Traffic Rules Penalties in India. Now you have already knows all types of New Traffic Rules in India. But here is an update on Insurance Premium will be doubled if you fine next time by any Traffic Police in India. Recent day’s people are purchasing Vahan Bima from all Insurance Service Provider who have discount on their Bike, Card, and Truck insurance premium. New traffic rules says vahan bima premium when you renew next year than they also include some charges of e challan. That means if you get e challan on insurance first than no problem but serious problem faced by when you get second time e challan on not following traffic than additional fees taken during renewal of traffic challan.


Second Time Traffic Rule Violation: If any person violates second time traffic rule, than next time their insurance premium will be increased. Insurance Regulatory Development Authority (IRDA) believes people can come in discipline and we can stop serious accident met on highway. 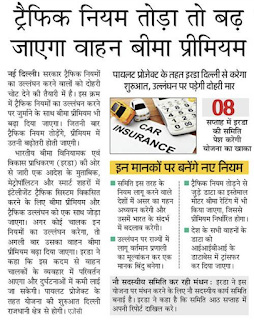 New Traffic Rules in India: Nitin Gadkari who is Transport Minister of India aims to curb road accident. He also said why fear of challan if you follow traffic rules and 50 percent of road accident belongs to age limit between 18 to 35 years.

1. IRDA will survey various traffic rules and fines in other country like USA, Europe and other developed countries. They will also collect traffic fines rate list which is also called Ticket. 2. When they compare plan of traffic rules with India than it will applied.

3. Data stored to give motor Vahan bima rating. So that premium can be adjusted.