- August 02, 2019
Upcoming Government Exam Calendar 2019 Here we have all papers of UPSSC who have not announced its written exam date and its paper pattern. On 2nd August job hunter may check all types of government exam calendar in list. In Hindi we have also uploaded the advertisement of UPSSSC 2 August exam calendar mostly for 12th pass students who have applied in 2016 and waiting to get final result. Like ganna paryavekshak exam held on 31st August 2019 which have 50 number of interview. 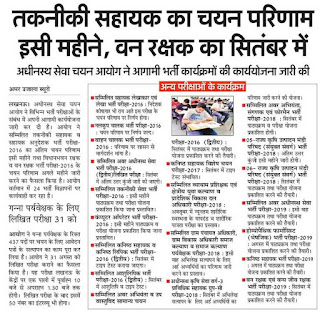 Combined stenographer exam 2016: in September typing test in stenography or on computer.

Combined Avar Abhiyanta and vastuvid Samanya chayan Pariksha 2016: in September you will check written exam syllabus plus calendar of this exam.