- August 07, 2019
Sushma Swaraj Biography in Hindi, Here we added last article 370 tweets of Sushma Swaraj in her Biography, Limca Book of Records holder. Sushma Swaraj in her last tweet she said," my dream come true and today feeling very proud on Prime Minister Modi govt who revokes article 370, 35 A. Sushma Swaraj died in very early age of 67 years and she last taken breath in All India Institute of Medical Science (AIIMS). She also represents India in United Station, Become foreign minister of India and she also said," I am taking retirement from my political careers. When India was celebrating, distributing sweets each other for abolishing Article 370, Article 35A. Sushma Swaraj was in her home and congratulating every party leader on this Winning Occasion.

Sushma Swaraj Limca book of Records: Limca book of record registered her name to holds largest number of follower as any Foreign Minister in the world. But if we look her previous records of Limca Book of Record she and her husband is most prestigious couple.

Sushma Swaraj Biography as Foreign Minister: Below is her last tweet on article 370.


Sushma Swaraj Pakistan Relation: women named Geeta who cross the border of Pakistan and upto 10 years she was trapped in Pakistan. On 26th September 2015 when Geeta return from Pakistan and our Foreign Minister at that period was Sushma Swaraj who named Geeta as Daughter of Hindustan. She also helped many Pakistani citizens who wants India visa on medical Treatment. 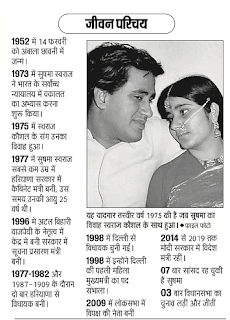 Her Hobbies: Travelling and Reading.
Debut: Lawyer in Supreme Court of India-1973.
Net Worth: $1.5 Million.