- August 09, 2019
PM Modi Speech on Article 370 Prime Minister of India Narendra Modi Article 370 speeches its speech on Article 370 Delimitation, PM Modi Latest Speech (Statement) on Article 370, 35 A. To prepare your upcoming exam interview, to discuss matter with your family on why modi government removes article 370, what is the meaning of article 370 and new article made for Jammu Kashmir, Laddakh. On 8th August, Thursday when President of India honored 3 people as Bharat Ratna in President House. Prime Minister Modi also attacks regional parties who support article 370 and separatist through his statement, even regional parties could not guarantee peace in region. He says Jammu Kashmir become Pakistan Tool on religion basis. But the main important message and think by you is why government chooses Jammu Kashmir, Ladakh as Union Territory.


Top 20 Analyses and Plan of PM Modi Speech on Kashmir:
Article 370 was breaker of Jammu Kashmir development. This is new era of J&K to start future. More than 40,000 innocent people died in 70 years.
Article 370 only gives Nepotism, Separatism, corruption to the people of Jammu and Kashmir. From 70 years, no other party discusses harm of article 370. And today Jammu Kashmir state is one of the least developing states of India.

Employment and Recruitment in Jammu Kashmir after Article 370 Removal: Due to 370 Article projects were blocked from 70 years. Local youth will receive employee by private companies who invest in Jammu Kashmir. He says Tourism beat Terrorism. 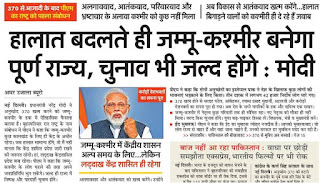 Election after deleting 370 Article: Now Panchayat can work freely without any personal advice from family who are administrating. Voting’s Rights after 370 Article scrapped: Thousand of people who have been living from 70 or 10, 20 years unable to vote in Jammu Kashmir election.

Economic Benefits of Article 370 Abolish in Jammu Kashmir: Many Kashmiri roam in India to sell their dried fruits and I personally check the quality of Dried fruits which is far better than any other dried fruit exporter in the world.

PM Modi Statement on Article 370:
1. Ladakh will Remain Union Territory of India.
2. Jammu, Kashmir (Condition): Temporary.
3. Article 37 was a tool/weapon of Pakistan.
4. He says to Kashmiri (Your representative will be chosen by you).
5. Due to separatist PM Modi says Democracy was null from 70 years.
6. He ignore Pakistan statement on Article 370.
7. He discuss Pakistan name only first time.
8. He has not said in statement to China. However foreign ministry said to China this is our personal matter.
So this is our short story cum analysis on PM Modi Speech on 8th August 2019 they we published on 9th August 2019.
Article 370 inspirational speech PM Modi