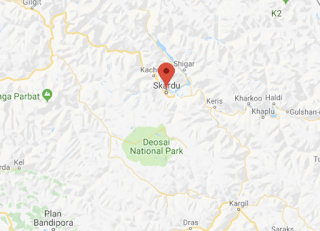 Name of the posts: Pakistan Fighter jets in Skardu Air base (Known as Pakistan Occupied Area.)

Pakistan Jets Near Ladakh Region: Indian agencies now working on all possible attempt to counter any misleads by Pakistan. And talking about Skardu which is Pakistan Air Base opposite to Union Territory of India ladakh. Indian Agencies is looking all attempts to counter all types of remedies and both Indian Army and Air Force keeping a close on it.

From the Pakistan Local, Skardu is local air base of pakistan used for training and army operation near border of india. in recent time Pakistan was trying to make big issue in international community  but they don’t able to survive their issue after India cleverly remove Article 370 and 35 A from Jammu kashmir Constitution. Now Ladakh and Jammu kashmir is Union Territories of India.

Skardu is Gilgit Baltistan region known as Pakistan Occupied Kashmir. And Prime Minister modi next mission is to take Pakistan occupied kashmir in his election campaign.