UP Police Thana Chowki Recruitment 2019 Here we have good news for both of you who are public and youth who are  searching for UP Police Jobs 2019. UP Government approved some new thana, police chowki and their posts on 3 July 2019. Chief Minister Adityanath Yogi directed department who belongs to select your for police department for production 21 New thana in 16 district and 12 police chowki in 11 district. So their is possibility of 901 jobs soon coming on official website. Home ministry has also given free hand to construct new thana and chowki as soon as possible. Below are some important jobs coming in up district with name.

CM Yogi Bharti Update; Chief Minister adityanath yogi instructed officer on working on new 901 jobs plus construct new department as soon as possible. CM Yogi already announce 1 lakh constable vacancy will come in 2019 but before old vacancy result should be final which can help to avoid  new court case on 50000 constable vacancy 2019. Below are name of new thana and chowki to be opened on time.

Age Limit: Depend on posts which you are applying. 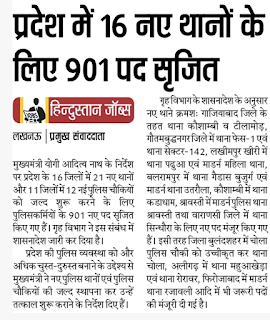