Richa Bharti Court Case Update 17 July: The I.O. has prayed the condition of donating Holy Kuran by the petitioner may be done aways with because of difficulties in implementation. The petitioner of the I.O. HAS BEEN FORWARDED BY id. APP. 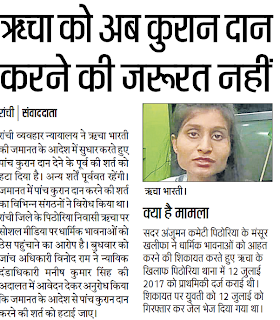 Richa Bharti Statement:
1. Richa Bharti Says Today I Distribute Quran Tomorrow Conversion.
2. On twitter number of Richa Bharti Supporter rises and she said i am not against any religion but one should respect other religion also.

UPSC Question on Religion: In Civil service exam interview question on same lynching, religion cases and rules applied and most important (What Would You Do) in 2017 UPSC exam.

Ranchi Court Richa Bharti: The state has prayed for modification of said bill order and modifying the condition to that extent. Having gone through the petition and heard submission of Id, APP. The order was passed by the court on 15 July 2019 allowing regular bail to the petitioner Richa Bharti. The court of Judicial Magistrate Ranchi modifies its earlier order by dropping the additional condition of distribution of copies of Holy Quran by the petitioner. Accordingly, order dated 15/07/2019 is modified up to this extent. The remaining order shall remain the same.

Note: This posts is only based on Social awareness. We don’t want to heart sentiment of any religion. We are the largest and only left democracy in the world.
BankCurrentAffairs Richa Bharti Quran Distribution