- July 30, 2019
India Tiger Population 2019 Prime Minister Narendra modi recently released the 2019 India Tiger Census which says India wins Tiger World cup to increase the birth rate of Tiger in India from other country. On 29th July we celebrate International Tiger Day 2019 and PM remind us Salman Khan Film named Ek Tha Tiger Converted intoTiger Zinda hai but this is not over. He further said in Mann Ki Baat that we have to support on increasing habitant of Tiger. Tiger report 2019 gives explanation on how many tigers left in India compare to 2016 Tiger Population. In 2016 their were 1411 numbers of tiger and in 2019 it is now increased to 2967 Tigers which is worlds largest number of Tiger Population. 9 years ago 2006 tiger meeting was held in Russia ST Petersburg for making Tiger numbers into double. Total 13 countries were in meeting.

PM Modi Tiger Census 2006-2019: As per today achievement India has completed its target to double the tiger before 4 years. PM Modi said," our environment is suitable to tiger and it is one of the most safest country for Tiger Lion. In 2019 total number of forest reserve 860 which dramatically increased from 692 forest in 2014. Below are some important which may asked in UPSC Exam current affairs, Assistant professor interview question and upcoming govt jobs 30 July 2019.Here we posts daily General Knowledge Date Wise. 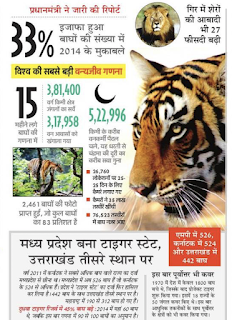 1. 33% INCREASED in population of tiger compare to 2014-15 census on tiger.
2. 15 months time taken to complete Jangarna (census in english) on Tiger.
3. Forest guard completed 5,22,996 km on their foot steps which said to 2 times of Moon Earth distance.
4. 35 Lakh photos captured.
5. Through India Tiger saving policy, Lion has also benefitted by increasing its baby to 27%.