IAS Cadre Allocation in UP, 592 Jobs in UP IAS Cadre, PCS Promotion


IAS Cadre Allocation in UP This News is For UP Youth who are planning to make career in IAS, IPS, and PCS Officer. New Cadre allocation will be constructed in UO to fill vacancy of UP IAS, Promotion of PCS into IAS Offices and people who are in waiting list o get jobs UPSC IAS Recruitment 2019. Posts are expected to increase and Central Government sent offer letter to UP State Government to check their IAS department for filling recruitment on fresh IAS Vacancy 2020 and Promotion. So when will new cadre allocated in UP than there will be also job creation of IAS, PCS, IPS etc.

UP IAS Cadre Jobs: 592 Jobs created specially in posts of Indian Administrative Service. In 2014 IAS cadre review and 29 posts are increased. According to 31st December 2014 adhisoochna 621 jobs are generated in IAS Cadre. In this posts 433 posts are filled through direct recruitment and rest of left 188 jobs are utilize on promotion. Before that UP Cadre received 592 IAS posts. 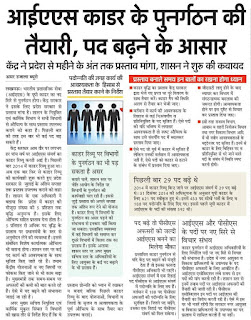 IAS Card Allocation (Punargathan): Below are important points that will be implemented before working on NEW IAS Cadre Allocation that helps to generate jobs:-

2. If posts will be increased in IAS department than PCS officer soon get promotion.

3. One of officer related to jobs selection committee said 5% minimum posts may come in next stage pcs officer vacancy.