Basic Shiksha Parishad Vibhag Lucknow: UP Government is going to shift its office from Prayagraj to Lucknow. Basic Shiksha Nideshak Vikram Bahadur Singh has informed vibhagiya Mantri Anupama Jaiswal and Apar Mukhya Sachiv Renuka Kumar to approve government order on transferring office to Lucknow. From 1978 Basic Shiksha Parishad office is working to transfer 1.58 Lakh teachers, issue their salary and make new recruitment from Basic Shiksha Vibhag Office of Prayagraj but Lucknow is capital city of Uttar Pradesh and holds Chief Minister officer as well as Lucknow is center of all Head Office that running all over UP. So it is necessary to make or transfer Education Department office to Lucknow from Prayagraj. Here we have some important posts that are vacant after office transfer.

Basic Shiksha Parishad Karyalaya: More than 90% State Government Officer spend their time in Lucknow whether you want call Gram Vikas Adhikari, Lekhpal, DIOS, Basic Shiksha Adhikari they may have to go Lucknow for important works and mostly their time spend on Lucknow Office. Due to this reason costs of running from Prayagraj to Lucknow become costlier from Petrol, Diesel, and Rent of Car etc. 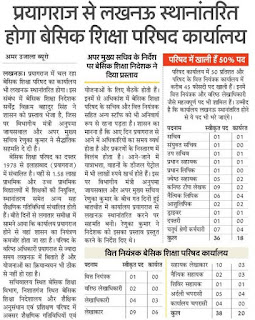