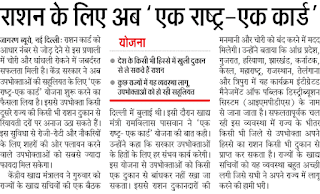 One Nation One Card Yojana Form: On Affordable price you can purchase and become ration card holder of those kotedar who don’t know about your personal information he knows through your Digital Ration Card.

DIGITAL Ration Card: Main benefit of One Nation One Ration Card is for youth who migrated from village to city for increasing livelihood and getting jobs. Ram Vilas Paswan is Food Minister of India, who looks all matter regarding Food Corporation Services.

Ek Rashtra Ek Card Yojana: Now costumer will not be bound to only one shop. Main problems occur when kotedar says ration card is not available for this time and you can next again come to get rashan card.