Jammu and Kashmir Assembly Delimitation: The Popular word of Indian Dictionary come in Light for removing Article 35 A and other such constitution that gives special right to Kashmiri, Laddakh, Jammu People is Dimilitation. The Meaning of Delimitation in Hindi is to reconsider the Boundary of Jammu and Kashmir. Transfer some seats of Kashmir to Jammu and Laddakh region which is big from area than Kashmir. In Election BJP Party has written in his Manifesto to remove Article 370, 35 A but problem is their ruling party of Jammu Kashmir don’t want delimitation as they says after 2026 delimitation should be done. Below are some important points raised by us on how delimitation of Jammu Kashmir is possible with Majority of BJP?.

Delimitation of Abdullah and Mufti Families always oppose delimitation in Jammu Kashmir as they (Omar Abdullah) says Any attempt to make changes in without asking people from the state of Jammu and Kashmir. But they don’t know Delimitation in India is already done in 2008. However Amit Shah Signal Delimitation held on 2019.

Delimitation Latest News 2019: Under Article 82 of the constitution after 10 years Parliament enacts delimitation act after every census which can establish a delimitation commission. In this act you cannot challenge this in Court or Supreme. In 1993 Jammu Kashmir passed bill on DIMILITATION should be done after 2026.

Meaning of Delimitation is Parisiman: To Re Draw Border, Redraw Seats, Re considers Right of People.

Note: But main problem is Kashmir region have much fewer votes compare to Jammu and Laddakh Region. Total Number of 87 seats is controlled under India.

Delimitation of Kashmir: Government is planning to reconsiders seats of Kashmir region, maximum 3 to 4 seats extracted and transfer it to Jammu and Laddakh region. Kashmir Valley is 96% Muslim dominated area and only 3 district are affected with terrorist organization operated from Pakistan. 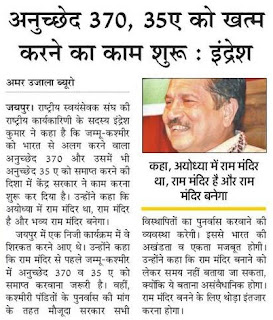 Effect of Delimitation in India: If delimitation done in Jammu Kashmir Region than new minister made from Jammu and Laddakh region and they may hint some positive impact on India and region.
Why Delimitation is important: we wants some changes in Jammu and Kashmir because Jammu region has highest number of voters so that it can represent its right. Good thing is also Kashmiri Pandit who was living in Kashmir still their votes are counting from Kashmir region.