PM Modi Wins India Election: Pradhan Mantri Narendra Modi won the India Lok Sabha Election 2019. More than 330 Seats with Majority he wins Election. Bad for Congress who managed to get seats only 97 to 100 and other party candidates received 110 seats. So Lok Sabha Chunav 2019 makes major victory of India Nationalist of Party Bhartiya Janata Party. Below are some important manifest BJP said to act as soon as possible.

Article 35 A: Removed The Article 35 A which Gives special status to Jammu Kashmir State after India Election the main problem of Article 35 A, Dhara 370 is Indian Unable to buy or work in Jammu Kashmir but native people of Jammu Kashmir can roam and buy any properties in India. Prime Minister Narendra Damodar Das Modi said in his speech about Article 35 A to remove it and connect to all india states and he also promise to benefit Jammu Kashmir People to use Indus Water that flows in Pakistan.

Good Road and Infrastructure: No Moon craters on road you may see on road and backward village will be connected to main road. National Highway road make according to jet fighter run.

National Security Scheme: Going to spend on Latest technology from America and Russia. After winning election the first batch of Rafale from France may be received within 2 or 3 months. 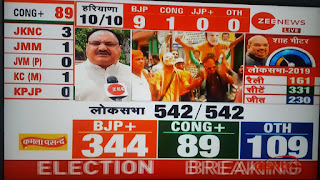 National Citizenship act, Advance fence border in the region of Bangladesh, Pakistan so that no people cross to enter in India.

Business People: To grow retail business National Trade Welfare Board will be created to help small shopkeepers. Objective of PM Modi is to make India 5 Trillion Dollar economy from 2025.