Pakistan Shaheen 2 Missile Today the Major Question we are asking from Pakistani Community that If Pakistan wants peace with India than why Pakistan Test its Shaheen 2 Nuclear Missile. The Day When PM Modi wins the battle of Democracy and Secularism on 23rd May 2019 and many other leaders in the World China, Russia, Benjamin Netanyahu, America and Pakistan itself congratulated PM Modi to continue PM Office for more 5 years than what is the meaning Shaheen 2 Missile. On One side of Country World’s Largest, Biggest, Strongest Community chooses Prime Minister Narendra Modi as Abki Bar Phir Modi Sarkar and on other side Pakistan Tested Its Nuclear Missile. Shaheen 2.


Pakistan Shaheen 2 Latest Missile Test in Tribal Region:  After Conducted Shaheen 2 Missile Pakistan Prime Minister Imran Khan Said,” We want peace with India and in this region. Few Months ago Foreign Minister of Pakistan said to popular news Channel of Pakistan that we will not allow other country to sell Advance Technology to India but Pakistan is Cashless Country whose economy is already in ICU Computer Monitor that have graph of Low BP.

Imran Khan The PM of Islamic Republic of Pakistan Himself wants PM Modi to win in this election but more than half of Pakistan Community doesn’t India to make India as Hindu Ruling Nation (Pints to be noted). Instead of Checking their internal issue like Asia Bibi case, Mass Conversion Hindu Minority Girls, Pakistan National Party always blames India to stop harassing minority in India. 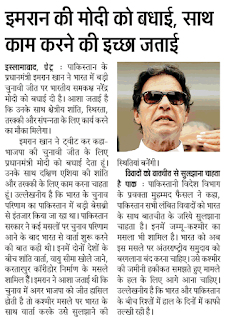 Why Pakistan Community Don’t Like PM Modi: Due to Some Incident in Gujarat, In UP. Minority minds diverted to focuses on minority issue which resulted if any person or Hindu talk about voted after wearing saffron clothes than he should not be eligible as party leader or Indian community don’t like or it will divide India like Pakistan and Bangladesh.