Masood Azhar on UN Terrorist List: Finally China has Recognized Masood Azhar as Terrorist which can help Pakistan to make document of FATF Grey List so that it can avoid sanctions from international Community. According to Indian Community China Stopped adding Masood Azhar in UN Terror List due to China Pakistan Economic Corridor because China Believes Pakistan instituted in border of European countries.

India China Gapped Due to Masood Azhar: India Always blames China for playing game on Terrorist as well as Terrorist. On one side China continuous stopping rights of Uyghur Muslim and on other hand its stopping Masood Azhar listed as terrorist by UN. India has provided all types of evidence related to Mumbai Attacks, Pulwama Attack, and Airplane Hijack made by Masood Azhar but due to China who is member of Five Security council; always use its power to make profit of it.

India Should is Member of Security Council: Many Members of United Nation Security Council always wants some changes in UNSC Seats because it is very outdated and balance of power is now changed and India becomes of third largest economy in the world. In 1 or 2 days before More than 200 American companies wants to shift their Factory to India because of Cheap Labor. 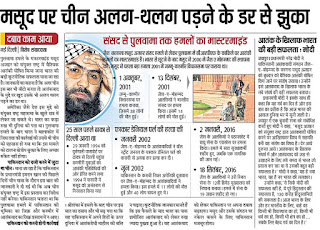