F21 Vs Rafale Jet Which Fighter Air Craft is better for India, F21 Feature and Function

- May 15, 2019
F21 Latest News 2019 Recently Lockheed Martin said to India that we will not sell F-21 TO OTHER COUNTRIES. If India government finals the deal but we should not about America Attitude towards other national and its 2+2 meeting held previous when India reach to buy Russia S400 Missile that America said ready for sanction or buy our Thad Missile. We cannot ignore Modi Leadership in The World attracted many companies to install their factories in India but today we are talking about fighter jets and its technology.


F16 Vs F 21: India has destroyed American Funded f16 Jets of Pakistan and people are saying there is not so much difference in F16 Jet Vs F21. But good things about Trade With USA regarding fighter jets is India expected to become loyal trade partner in defence project. We have also received apache Helicopter from them and USA congress keen agreed to important status of (Major Defence Partner of US) defence technology such as Missile Loaded Drone, Thad Missile, and Transfer of Technology or may be NAATO Ally during OBAMA Modi Meet.


India France Rafale Jet Deal: We can compare Rafale Jet Made of France Engineer with other J-17 Type Pakistan China Jets because of its size, advance technology related to Euro fighters Jets. We not only receiving Advance Jet in the name of Rafael but it also loaded with Euro Missile Meteor and Scalp missiles. Their 36 Rafale Aircrafts that India order and may be deliver after Prime Minister Election.

Note: New Rafale Deal was Best than Old Rafale because of Technology, With Transfer of technology. 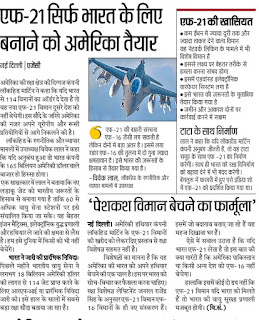 F21 Lockheed Martin: India has sent to all Aviation company in the world who wants deal of 100+ Jets in the price Range of 15 to 20 Billion Dollars. But before finalizing the deal India will scrutinize all types of Factor.

What Defence Expert Said From India: F21 is upgraded version of F16 and all new featured are in F21 is only replica. It may be traced by Pakistan old F16 Jets. But they also believes Indias Defence will become more advance with new jets. We cannot believe America or its company that they may sell F21 or other F19 TO Pakistan during war time.
Defence Research Pakistan Media on India Rafale Deal