CM Yogi Biography You will always see Chief Minister Adityanath Yogi in Saffron Kurta and Dhoti which is Indias Traditional Wore all over India States. After Winning Election of 2017 BJP Selected most popular candidates from Gorakhpur is CM Yogi who 22nd Chief Minister of Uttar Pradesh. Many people believes CM Yogi is working to enourage Hindutva in India but this is not correct CM Yogi after becoming Chief Minister has changed its Mind to follow Sabka Sath Sabka Vikas. On 19 March 2017 with Bumper Majority BJP grabs 80 %  71 Seats in Uttar Pradesh.

CM Yogi Biography in Hindi At the age of 22 he become a Guru of Mahant Avaidhnath and takes all types of Knowledge which can helps him to teach its followers. Applicants who have not seen Gorakhnath Mandir in lifetime are adviced to visit whether your are Muslim, Christian, Sikh or any other with your family. After death of Mahant Avaidynath in 2014, He (Aditya Nath Yogi) was made Peethadishwar (Head Seer) of the Gorakhnath Math n 14 September 2014 with all types of Tradional Rituals. 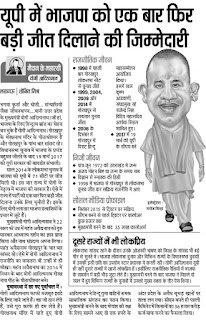 Gorakhpur District: He has won 4 Election cointinously from Gorakhpur.

Founder of Hindu Yuva Vahini: While living in Gorakhnath Mandir He made Hindu Yuva Vahini Sangathan whoes main aims to look social welfare scheme, work for Hindu rights and to stop Cow Slaughter (Gau Rakshak). Well every religion and its people have own beliefe so India is Democratic country as well as Hindu Majority states like other Majority country who follows rights.