Burqa Ban in Kerala For Maintaining National Security Indian State KERALA has banned Burqa in more than 150 school that allows people to cover their face. This Burqa Ban effect rises after Church attack in Sri Lanka.This is very strange that Burqa Banned Order is not given by Government itself but letter of Burqa Ban written by Muslim Organization named Muslim Education Society.

In Kerala many Debate organizes by secular community on whether to ban Burqa is good for Muslim community or not while Orthodox Section belongs to Sunni community don’ts wants to ban Burqa, naqab for women because they think they will unable to follow the rules of God. 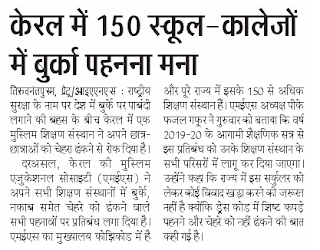 MES Chief Fazal Gafor said to Time of India, NDTV that THERE IS NO CONNECTION related to Sri Lanka Burqa that allowed all over Burqa ban from Public, Church, Temple ETC places to stop extremism.


The circular was issued on 17th April but after media attention and Kerala High Court order to wear Headscarf’s and other things which allows in ISLAM. But latest decision crackers in the mind of Orthodox people as they are saying this I against High court Judgment and we (Sunni) don’t follow them.

Sunni Religious Organization in Kerala said,” MES has no right to speak against Islam. After listening this Gafoor said to reporter that Covering face is new trend in Kerala and 99% percent of Muslim, Girl Women don’t covers their face.

Note: Gafoor Who is also doctor and always known for his Secular Speech.Distance of Kerala to Sri Lanka according to its Geography is not so far.
Burqa Ban Kerala Madarsa Board Teacher Muslim Education Society UP Madarsa Board