69000 Assistant Teacher Answer Key Judge of Lucknow Bench order to disclose answer key of 69000 Teacher Vacancy but not to declare the final result according to cut off marks of Government. This is the last chance of Shiksha Mitra to make their salary double from 10,000 to 35,000 per month through which their tag Shiksha mitra removed with Assistant Teacher. In the current scenario case of 69,000 Shikshak Bharti next hearing date made on July 2nd week 2019. So still one month time wastage for youth and government. As government wants proper candidates should be selected from their made qualifying marks 65 to 60 General OBC.

Shiksha Mitra under 69,000 Assistant Teacher Bharti: Government should look atleast one time on Shiksha mitra family because they have spent more than 10 years and have also completed BTC B.ED course in previous government of Akhilesh Government. In this 69,000 Sahayak Adhyapak Bharti highest amount of loss will effect to only and only Shiksha mitra. Shiksha Mitra wants government must focus to decrease cut off marks up to 45 to 40 so they can qualify it. Government Senior Advocate (Mahaadhivakta) said to court of Lucknow bench that 6900 candidate’s effect after filling case from Lucknow high court and same as it is 15 thousand candidates filled case in Allahabad High court also. More than 22,000 candidates waiting for 69,000 Teacher Final Result 2019. 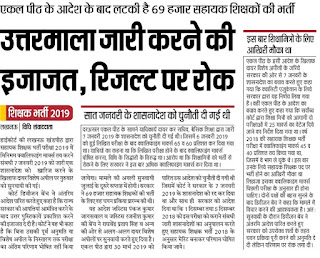 69000 Assistant Teacher Final Result 2019: Senior Judge of Lucknow High court says we want more time to discuss 69,000 teacher Bharti result to order but we ordering to declare answer key of 69,000 teacher Bharti. But final result of joining only published when we want it to publish, if any person again files case than this will be last appeal yachika.