Congress Leader Rahul Gandhi ki Nagrikta: As per News Rahul Gandhi has filled Income Tax Return Form in Britain and he also claimed in that Britain ITR form about he holds British Citizenship. Petitioner says if any person is citizen of another country than HE/SHE should not have access to become political Leader of India (Sansad) which is written in Article 9 and Indian Panel Act 9. 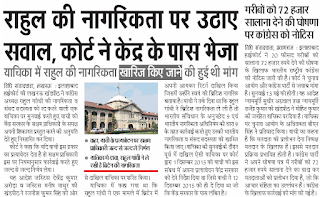 2. Petitioner Rajnish Kumar have filed the case on Rahul Gandhi Citizen is not a citizen of India.

3. He said one of Rahul Gandhi Company working in Britain here he applied for ITR and claims National of Britain.

4. Article 9 says one cannot be citizen of India if HE/SHE wants to become MLA, Minister.