Ijaj Shah Harbored the Most Wanted Terrorist for Year: When many countries trying to search Osama Bin Laden Place than Former Brigadier Ijaz Shah shelter him from the world. So it is very concern o India also that one of spy enters in Political Fields which may supports one of the wanted criminal groups in the worlds (Jaish E Mohammad, Lashkere Toiba). 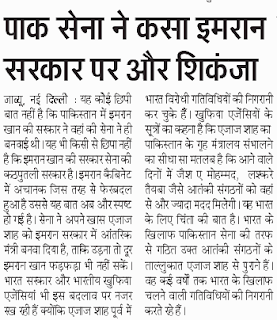 Home Ministry of India : directly given explanation on Joining Ijaz Shah that he might support these free terrorist organization operating in Pakistan to disable peace in Kashmir.