- March 15, 2019
New Zealand People Says: Many people were killed in a mass shooting at a mosque in the New Zealand city of Christchurch on Friday. A man with semi-automatic weapon dressed in black enter the Masjid Al Noor mosque in central Christchurch.


Quick Action: 1 Person is In Costudy.

New zealand Police advise all Country mosque to shut their door nationally so that no more incident happen between this Christchurch Shooting time.

Police Commission of Christ church city says in Facebook video their had been Dual Fatalities.

One of Eyewitness says,” The was continuous shooting for 10 to 15 minutes. He further said shooting begins on Friday 1.40 prayer time. He said he saw 5 people die on spot. 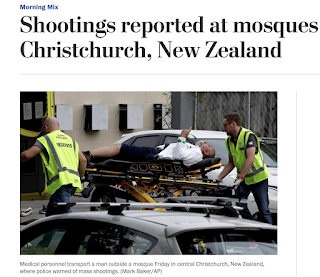