Railway Upcoming Vacancy 2019: In update of Railway upcoming vacancies after recruiting of Railway Employee as a Loco Pilot Technician, Group d Staff and assistant jobs in railway. their is still needed to add more jobs ion railway department. According to opposition party congress has given statement on current jobs filled by current ruling government. attacking modi government opposition parties says still half posts is vacant in all railway department and Modi government unable to fill.


Railway 10% Reservation For General Category: opposition party further attacked & says to government who has given 10 % reservation to general candidates but now no vacancies is their. from 2008 to 2018 more than 2 lakh employee retired from railway various department and current government fills vacant posts only. Gathbandhan Party said 3 Lakh vacancies are vacant in Railway this information revealed from RTI INFORMATION (RTI ACT).


RTI Information on Railway Recruitment 2019: In an reply asked from RTI WHO SAID," It is very disappointment that only limited number of vacancies filled in railway department but their is huge number of retirement, transfer, promotion of one post to another posts was done before 2018. in 2018 government has allowed 1 lakh 20 thousand jobs in railway department but this number is bellow half of group c and group d upcoming staff wise vacancies in railway.

RRB Upcoming Jobs 2020: so this information is based on RTI (Right to information act) who have cleared youth mind about vacancies may come or not. so in upcoming month or year half of 2 lakh jobs in railway may come. you should only have to wait and watch the oppenings. 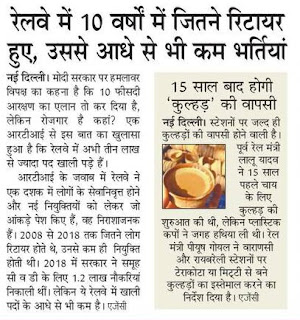