General Category Reservation in 2019 there is scope for General Category Students who have income below 8 Lakh. Recently Prime Minister Narendra Modi Government gave green signal to General Category People who are fighting from many years to give reservation on Income, Poverty Basis. We all know that we are best developing developed countries in the world from our buying capacity, Manpower, Bright Minded People and Record in Foreign Direct Investment. But to get govt jobs we allow reservation according to Caste, Religion basis.

General Category Reservation Latest News 2019: National Sample Survey Institute of India say in India there are 95% people belongs to Economic Weaker Section Society. And the Amendment bill that passed in Lok Sabha may fully not get proper benefits because the recommended quota may be over and above the 50 percent reservation already to the SC ST and other backwards classes.

1. Various Party Reply after Samanya Arakshan: BSP, TDP, SP, DMK welcomed the lok sabha general bill but they said this is Political stunt.
2. Eligibility Criteria to Make General Category Reservation is: Rs 8 Lakh Yearly Income from all sources.
3. in recent time BJP losses party seats from Madhya Pradesh, Rajasthan and Chhattisgarh. Where it was in power.

Some Popular Comments on Social Media on 10% reservation general Category is
Thank you Modi ji for supporting poor from general category to all religions.
Hindustan Needs BJP for one more time.
Abolish all Reservation rules.
No Opposition Party could oppose it. 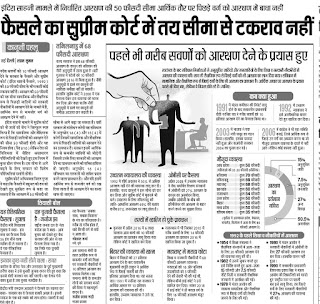