List of Women in Indian Politics Today We have Top Number of States who prefers Women Representation in their Cabinet Minister List 2019. The Survey carried out by Hindustan Media company who have combinely make share of women in Indian Parliament, Female Representative (Pratinidhi) in Central and State Govt. The largest Number of Women in Parliament share by mostly American and European Countries and they deserve it because they have pass strict law and police action that do crime (sexual harassment, rape, divorce and domestic violence) against women such name.

Female Representation in Indian Parliament: The Ratio of Female Politician, Women in Public Sector is day by day increasing. Recently Current Government has also passed bill related to women triple talaq which create effect in social economic, political purpose in itself. After triple talaq for women in, government should banned dowry system in India that creates bankrupt to Girls Family. Some important names of women who get name fame in World representation are:- 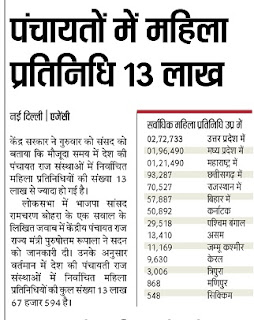