Bhartiya Antarashtriya Vigyan Mahotasva:- In Capital City Lucknow Science will be organized and Chief Guest will be Our Prime Minister Shri Narendra Modi Ji, President Ram Nath Kovind. This will UP 3rd biggest mega function names science Festival of India. In year 2018 UP Government has organized two summit i.e. Investor Summit where indistrialist from all over the work come to see possibility if Investment in Uttar Pradesh. And Seconds on is One District one product scheme which gives contribution of product marketing famous in UP District.

1. Third International Science Festival was carried out at 13 to 16 October in Chennai.
2. In this 4th Science Festival of India bidding placed by New Delhi, Hyderabad, Lucknow, Bengaluru but Central government has chosen Lucknow this year.


3. In India, Uttar Pradesh is biggest state from its size and Population. 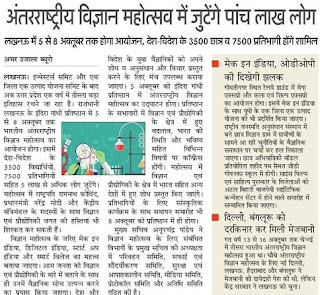