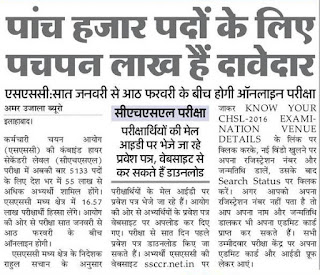 There will be negative marking of 0.50 marks.

Exam is descriptive type and will be conducted Offline.
Exam Pattern: Essay, précis, letters and application writing etc.
Total 100 marks and exam duration will be 60 Minutes in Hindi or in English.

Skill Test: Data Entry Speed of 8,000 key depressions per hour on computer. Skill test will be applicable only for Data Entry Operator post.

SSC CHSL 2016 Admit Card: CHSL admits card posted in all on regional websites of SSC to enter in the examination hall without the admit card.

SSC CHSL 2016 Answer Key: On the official website of SSC Morning and Evening shift published after the exam all the sets of the question paper

SSC CHSL Result 2016 Cut Off Marks: SSC will upload CHSL exam result on its ssc.nic.in, Cut off is minimum marks that are compulsory to score and entery in Interview and Typing Test.


Related posts:
SC CHSL recruitment 2016 total 5134 jobs Staff Selection Commission SSC Court Clerk Recruitment 2016 is all set to conduct examination for Combined Higher Secondary Level CHSL, LDC and (DEO posts. ssc chsl 2016 Exam date written examination is scheduled to be conducted on October across the country.ssc chsl latest news is that online submission Application Part-I of Registration starts from 8 October 2016 and last date for submission of paper application manual both Online Application Submission Part-II Registration 11 November 2016 (up to 5 pm only. The Staff Selection Commission will hold an examination for ssc chsle Recruitment of Postal Assistants/Sorting Assistants, Data Entry Operators and Lower Divisional Clerks on Sundays 7.1.2017, 5.02.2017 and Paper 2 exam date 9.04.2017, the details of which are as under

SSC CHSL online application form 2016 Tentatively the vacancies for the post of India post office Postal Assistant, Sorting Assistant, LDC and DEO like previous years jobs are 3523, 2049 and 1006 respectively. Apply Online through Official Website Online submission of the application may be made at website www.ssconline.nic.in first link and ssconline2 Instructions are available at the site an All India Open Competitive.

Education Qualification: Candidates must have passed 12th Standard or equivalent cbse, up board etc examination from a recognized school.

SSC Age Limit: 18 years to 27 years. Age relaxation is applicable as per the norms.

Application Fee: Rupees 100 only submitting their application online shall make their payment through the State Bank of India as per instructions. No need to pay for all Women candidates and candidates belonging to Scheduled Caste, Scheduled Tribe, Physically Handicapped, and Ex-Servicemen, eligible for reservation

Ssc chsl how to apply: with scanned photo & Signature and direct link and shortcuts