Saudi Arabia has given a shocked to the world recently match between Saudi Arabia and Lionel Messi Argentina team was played. This is also the biggest upset in the history of FIFA World Cup because Argentina has played 36 match and they have not lost any match but in today's match Saudi Arabia defeated Argentina with two and one goals. 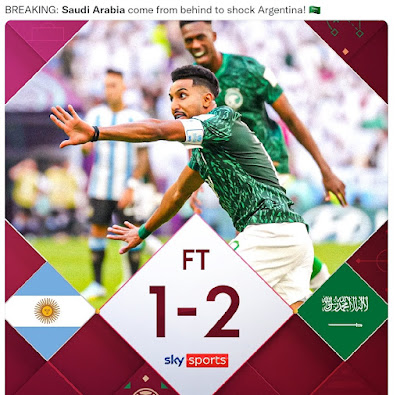 Credit goes to Mohammed Al Owais who have saved five goals of Argentina and he is now become the most a goalkeeper that has made a single game so far at the 2022 World Cup. It was Lusail stadium and you all know that Argentina has large number of fans and in this match total 80000 people can sit but official attendance at Argentina Saudi Arabia has just been announced as 88012.

Saudi Arabia is not a top 10 team neither top 20 team and you can count them after team rank 50 numbers in the world cup that has ended Argentina's unbeaten run of 36 games. On current time FIFA rank Argentina third in the world and their already given prediction that Argentina is top 5 team that can win this world cup.

Lionel Messi last defeat was 3 year ago on 3 July 2019 against Brazil who is one of the best team counted in soccer match in the Copas America semi's.

However there is hope also and Argentina have best Soccer players in the world that can give them winning matches in the group but this is the biggest shock aur upset of the 2022 World Cup. Argentina versus Saudi Arabia live score of FIFA World Cup 2022 update is already there and you can see ARG 1 Vs KSA 2.