Before Vidhan Sabha Election UP Government has able to add more Govt jobs in their Election File. Recently Chief Minister of Uttar Pradesh Adityanath Yogi make virtual meeting with Finance Minister of India Nirmala Sitaraman and talked about banking situation in UP and how to improve work and management of banks operating in UP. Finally Central Finance Minister Sitaraman agree for expanding banking staff and allows to open 700 New banks along with 700 new ATMS in UP. 75-75 Banks branches WILL BE OPEN by SBI, PNB and Bank of Baroda, Indian Bank and Bank of Maharashtra will open 50 branches in UP.

How Much Population Required To Open Banks: CM Yogi discuss problem faced by public when their bank far from their home. Atleast 1 Bank should be open in population of 1 Lakh people. This matter was tabled during talk with central minister. 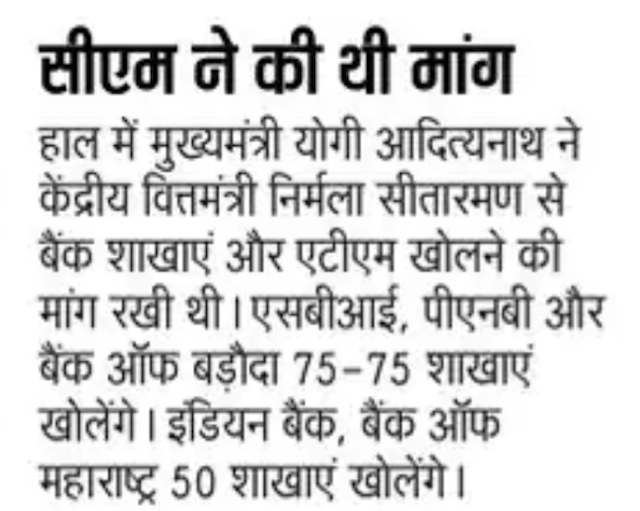 So before 31st March 2022 all 700 Banks with their 700 ATM will be installed along 23000 new Employee. Talking about employee ration in these 700 banks will be on below pattern.

In 1 Bank branch when it start operating. 15 people get direct jobs and in indirect way 15 bank Mitra are able to open shop for handling new bank accounts. So through one branch 30 candidates can get jobs.