Sunrisers Hyderabad Player Supper Black Lives Matter (Kalu): In current situation, world is united against only black racism, former West Indies skipper Daren Sammy reveals this information and he also says, I AM Very Angry after I Know The Kalu world real definition. However his former team player of Sunrisers Hyderabad have denied any such claims by Sammy.


Many south India also admitted they have been faced same racial comment when they played in North India or in West India. Wicket Keeper-Batsmen Parthiv Patel denied these allegation on racist slur allegation by Darren Sammy. 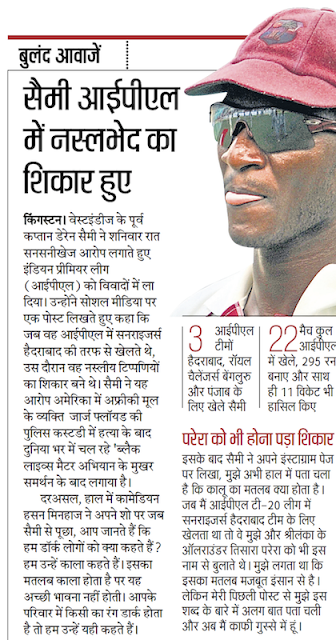 
Senior Board officials, said, Sammy should report at that time if he had any complaints. But if Darren Sammy wants to file complaint the he is welcome and Board can investigate.

Up to 2020, Sammy, has played 38 Tests, 126 ODIs and 68 T20 Internationals, captained the West Indies to two T20 World Cup titles. He supported #Georgefloyd (46 year old African American, died on May 25 in Minneapolis during arrest by Derek Chauvin, Knelt on his neck) and #blacklivesmatter hashtag on twitter.
IPL Indian Premier League