UPPSC Khand Shiksha Adhikari Salary 2020: The salary structure for District Basic Education Officer is given as per the Sixth Pay Commission is as per the Pay Band -3 Rs. 9,300/- – 34,800/-, Grade Pay - 4,800/-. However, the Pay Scale is depend on 6th Pay or Seventh Pay Commission in some states 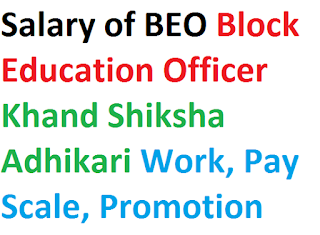 UP BEO Work and Job Profile: The Selection of District Basic Education Officer includes overseeing all district level administrative services of education. Such as appointment, attendance, promotion, inspection, Counseling and taking punitive actions in case of irregularities against the teachers in the government schools fall in their district region. Time to time BEO also changed implementation of policies and programmes in the area of basic education etc.