- October 27, 2019
DFCCIL Train Captain Recruitment 2020 Latest News DFC Loco Pilot Recruitment 2019 RRB DFCCIL 2600 Train Driver Recruitment 2019 Railway 2600 Train Driver, Railway Train Captain Salary. Indian Railway is going to fill railway driver in their Dedicated freight corridor location. More than 2600 jobs are opening from January to April Month. Railway DFC Driver Recruitment is best jobs for un employment youth who only wants to make career in Railway as Loco Pilot, Assistant Loco Pilot. In this posts we will share some of the important items mention on Hindustan News Paper Sources. DFC Recruitment 2020 candidates who will be shortlisted as a driver their name will be changed or called as Captain and Co Captain.

Educational Qualification: 12th pass from any recognised board. 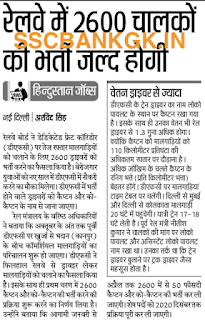 Work of DFC: For transportation of Goods and Commercial. Railway has made special branch for its Malgadi. Dedicated freight corridor corporation of india limited is public sector company of india and their is no privatisation news and govt will never privatise it because of its income and major source of Railway Revenue comes from Railway DFC.

Train Captain Job Profile: Making career in Railway as a train captain of co captain is life changing tips but your health and mind should work proper to get jobs as a Railway Train Driver and Railway train Captain.

DFC Train Driver Recruitment 2019: In stage in 2600 recruitment of Railway Captain and Co Captain jobs given to youth and this decision already stamped in Government.


Railway Train Driver Officer said January to April 2020 we will appoint 1300 posts of captain and co captain. which is approx 50 percent. Rest of the 1300 posts Railway Captain jobs started from the month of December 2020.

Railway Captain Salary: Railway captain will receive salary pay scale and incentive more than from Railway Loco pilot or any Tejas Train Driver. Not only for their captain posts like Air India, Jet Airways, Etihad but also with their work and speed.

How Much speed Railway Captain will run Train: The maximum speed limit maintain by any train driver or Railway captain is 110 Kilometer per hour. For example if he/she wants to complete commercial train journey from Delhi to Mumbai or Delhi to Kolkata than 20 hours must be taken by any Train Driver.
DFCCIL Recruitment Train Captain upcoming jobs