- September 09, 2019
UP Assistant Accountant Recruitment 2019, UPSSSC Sahayak Lekhakar Recruitment 2019, e Tender UP Vacancy BSA, EMI S Incharge vacancy in Basic Shiksha Adhikari. E tender released on 9 September 2019 to tell you about how many number of vacancies are vacant in UP Basic Shiksha Adhikari Office, Barabanki. You can check advertisement that spoke about three types of vacancies such as Computer Operator, Sahayak Lekhakar, and EMI S Incharge. From 9 September to 24 September 2019 service provider can fill up the form of E Tender on Jobs. Later on when ever jobs these agencies official open the advertisement we will be published it in our SSCBANKGK portal. Letter sends from District Magistrate of Barabanki District under Rajya Pariyojana Nideshak, Sarva Shiksha Abhiyan paper number 663/2011-12.

Educational Qualification: Candidates should have Graduate in commerce from recognized University or diploma in commerce. O level diploma. 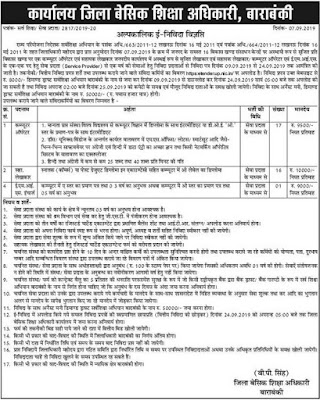 Age Limit: For Both posts minimum age limit is 18 years to 40 years. Age Relaxation as per govt rules and regulation.