- August 02, 2019
UP 68500 Marksheet and Joining Date This is 68500 Assistant Teacher latest 2 August 2019 in which 9 candidates are lucky to joining letter of controversial 68500 Shikshak Bharti. Now teacher vacancy in UP become national dish of Indian which is Khichadi and more than 1000 of job seeker filed case in Allahabad High court to get judgment in favor of them. Every day many students gathered in CM office, Lucknow to protest for not working on unemployed

youth. High court of Allahabad heard the matter of 685, 00 teachers and ordered government to make new Marksheet within 15 days of time and instructed exam regulatory authority to give joining letter. In this matter of selection court already said to authority on revealing result within 2 months. But time is over ad yachigarn again filed avmanana Yachika in court than in response AHC given ultimatum of 15 days to publish result as soon as possible.


LT Grade 2014: This posts is Breaking rules of the day. In Rajkiya Inter College 2014 Bharti number of candidates was given joining letter without any document verification. It is estimated 700 plus post involve in corruption. According to sources 2917 candidates were allotted joining letter in 15 Zone in which only some candidate’s documents were check to make paper only. Total 742 people allotted their zone for 441 Women, 301 Male. FIR has been registered to make case of 6 employee and administrative officer as per their involvement in LT Grade 2014. 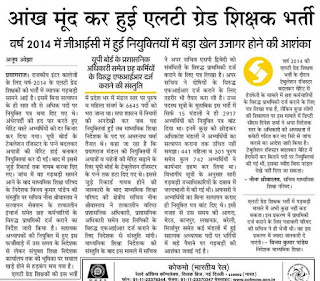