UP ITI Private College Fees If any ITI College in your region is charging high amount fees after fixed charged marked by government regulated fees for all ITI Niji College than you must read this posts because UP Government has issues adversaries to all private college who are grabbing fees to student for their personal benefits. From Lucknow Department of ITI said we are on mood to track those ITI College who are charging high amount of fees in the name of technical course. From now onwards you may have to pay fees according to college grading and facility they are providing.

UP ITI Private College Non Technical Fees: Now admission of ITI very soon between 1st week of 10th June and more than 2 Lakh students who takes admission in ITI will be benefitted in new fees mode. This Year 2781 Private College is ready to add themselves in Joint Admission of UP ITI Admission. There are 40 colleges in Lucknow who are government.  Akhil Bhartiya Takniki Shiksha Parishad announced 3 years fees to all private college who will take students after admission. From the side of AICTE in year 2014 ITI Fees re arrange but management colleges don’t wants to interfere their fees related rules and they start protesting to make new fees prospectus. 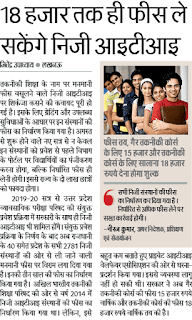 UP ITI Technical Courses Fees: Now you have to pay maximum Rs 18000 for Technical Course and Rs 15,000 for non technical courses per year basis. Private ITI welfare association has agreed to new fees but many students complaint of not getting suitable amounts of instruments, facility and electricity that private college claims.