Poll Watchdog App of Election Commission: During Election Voting you don’t need to search who is the Prime Minister of India what is Current Election Status from region wise. There is one application is available in Google play store named Poll Watchdog Helpline used to check Chuan Ayog Result 2019. On this application you may read all update Election Counting from 8.00 AM to Midnight 23rd May 2019. In this application you can select one candidate who will give you party wise BJP, Congress, Samajwadi Party, Bahujan Samaj Party etc who are on 1st spot.


Poll Watchdog Election Result 2019: Exit Poll already declared Prime Minister Modi as a Winner but all other opposition party doesn’t like this Exit Poll Opinion result because they have made Mahagathbandhan to dethrone PM Modi as a Prime Minister. Poll Watchdog app is made by support of Election Commission of India and returning officer of Election commission send sms in the name of candidates you have chosen to receive updates. Poll Watchdog app launched on 12 May 2019 for supporting digital India scheme. Round wise update of Poll Watch gives you Election seat result party wise candidates name who are on trending to win. 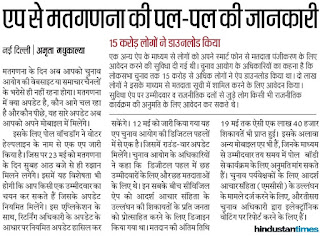