Pakistan Hindu Doctor Arrested For Blasphemy Today we have another Blasphemy news from Pakistan who again become angry after ONE Hindu Doctor found guilty in Blasphemy Laws of Pakistan where minority have not right to speak against Islam. According to news from India Today, Twitter Handle Press Trust of India Hindus shops live burnt by radical Islamic protestor and demanded death sentence for Pakistani Hindi Doctor. Democracy of Pakistan says you are not allowed to speak against their RELIGION. The incident takes place in Pakistan Sindh Province of Phuladyon Town in Mirpurkhas Districts.

Ramesh Kumar Pakistan Hindu Doctor is common name that gives service of Health in his region according to news he was accused of tearing pages from Quran Book. Thank god to police who have taken him frequently to safe region otherwise he may be punished by Radical People of Pakistan. More than 75 Lakh Hindu People Lives in Pakistan but its estimated nearly 90 Lakh Hindu living in Pakistan in Census. 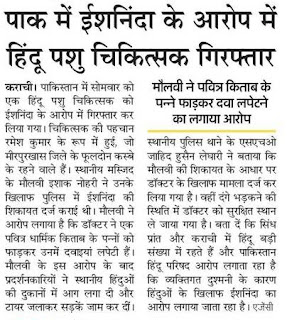 Problem of Blasphemy Case in Pakistan: In Pakistan day by day situation becoming worse due to Economic Crackdown, High Prices of Domestic Use Goods and without proper law and constitution and law, fear of Hindu, Christian, Shia and Sikh day by day increasing. Much Minority community applies for Visa on Holy Visit but they don’t want to go in Pakistan after coming to India. As they say we are safe here and we can perform everything we like.
India Pakistan news Pakistan Media on India